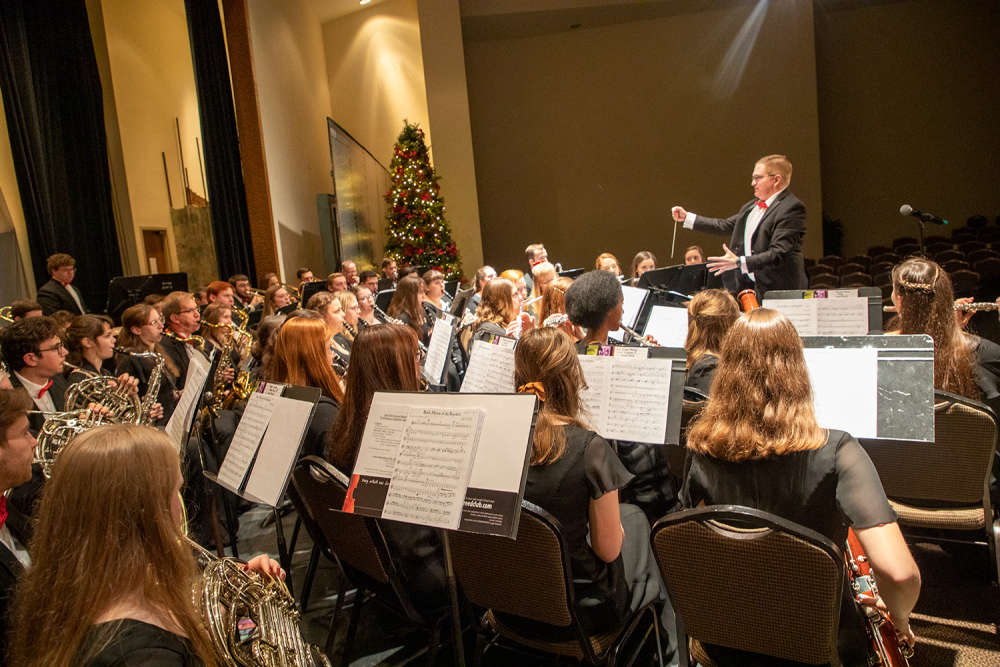 The College of the Ozarks Concert Band and Jazz Ensemble will perform a Christmas concert on Friday, Dec. 2, at 7 p.m. in the Royal Oak Forum at The Keeter Center.

The concert is free and open to the public. Seating is first come, first served.

“This year will be a little different in that both the C of O Jazz Ensemble and Concert Band will be performing, as opposed to just the Concert Band in years past,” said Kevin Powers, associate professor of music and director of the bands.  “The Jazz Ensemble will be performing some absolutely fantastic Christmas swinging big band tunes that I have no doubt people will really enjoy.”

A special solo performance will take place at the concert:  the C of O Concert Band, along with professor of trumpet Bob Smither, will give the world premiere performance of “For Which We Stand,” a patriotic concerto for trumpet.
“Bob is a world class trumpet performer,” Powers said. “I can’t wait for everyone to hear this magnificent piece of music.”
The Christmas Concert is a revered tradition at College of the Ozarks and Powers, on behalf of all the dedicated musicians, expressed anticipation of the event.
“I hope this concert reminds everyone what the true meaning of Christmas is — the birth of God’s son and the gift of salvation for everyone who chooses to receive Jesus Christ as their personal Savior,” Powers said. “This is going to be a very special night, and I look forward to seeing everyone!”
Concert Band Program
“A Christmas Festival” — by Leroy Anderson

“For Which We Stand” (world premiere) — by Paul Murtha

“Clash of the Carolers” — by Matt Conaway

“Joy to the World” — by Isaac Watts/arranged by Jay Chattaway

“Away in a Manger” — arranged by Paul Clark

“In the Mood” — by Joe Garland

(College of the Ozarks Press Release)